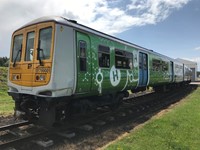 The ‘HydroFLEX’ demonstrator has been converted from a Class 319 electric multiple unit, in a partnership between rolling stock company Porterbrook and the Birmingham Centre for Railway Research and Education, which exhibited its 10¼in-gauge locomotive Hydrogen Hero at last year’s event.

BCRRE Managing Director Alex Burrows told RAIL the ‘HydroFLEX’ concept was born at Rail Live 2018. “We set ourselves a bigger challenge for the next Rail Live, and this is the result,” he said. “This is leading research in the UK - being done in the UK and with UK suppliers. If you can’t get electrification in certain places, hydrogen is a feasible alternative to diesel.”

In addition to being fitted with a hydrogen fuel cell, converted 319001 retains its ability to draw power from either the 750V DC third-rail or 25kV overhead wires. No full-sized hydrogen-powered train has yet run in the UK, but Alstom’s ‘Coradia iLint’ entered service in Germany last year. Porterbrook and BCRRE’s tie-up was formally signed at the InnoTrans trade show in Berlin in September (RAIL 862).

VIVARAIL is to use Rail Live to showcase its new fast charging system, developed to replenish its battery-powered D-Train.

The company says the system can recharge a Class 230 in minutes.

“The idea is that charging infrastructure would be placed at termini, and the train would recharge during the turnaround time,” Vivarail’s Head of Marketing Alice Gillman told RAIL.

“There are so many branch lines across the country where you have layovers at each end. You might need a charging point at each end, but this could maintain the existing timetable on everyone that we’ve looked at. The train can now run 60 miles between charges.”

Vivarail’s recharging apparatus includes sections of third and fourth rail, with train-mounted shoe gear made of carbon ceramic in order to withstand the heat generated by a rapid drawing of electric current.

As an alternative to the charging apparatus, Vivarail says the battery D-Train could also be recharged from 25 kV overhead wires, assuming the set were to be fitted with a pantograph.

MacRail has been helping Principal Rail Contractors to manage their work sites for over a decade. Our bespoke software and highly trained staff put us in the unique position of being able to satisfy our clients’ requirements. This is because our products and services can help you achieve targets, keep your workforce safe and mitigate risks. Fatigue360 is a software system developed in accordance with the requirements of rail, aligning with industry regulation as well as the HSE Fatigue Index to provide an end to end solution for the sector. Find out more here.

"Rail Live in our opinion is the premier annual event to showcase our innovatory plant, equipment and gives our best asset – our people, an opportunity to engage with new and repeat customers to discuss these matters in a brilliant setting with many other companies showcasing their assets too, therefore making it such an interesting day out to further one’s knowledge of developments in the Rail Industry."

This year Pro Rail Services we will be showcasing:

The RRV Drainage Suction Unit in particular is a result of our innovation and collaboration with the Network Rail South East OTP Specialist team. The unit can be controlled by the RRV operator in the cab and does not require any personnel to physically manhandle the unit on site thus significantly reducing safety hazards. As the unit also can be camera viewed by the RRV Operator and comes with a dust suppression asset, it is a very efficient method of executing Railway Drainage Suction activities such as catchpit cleaning, flooded UTX dewatering and wet bed removal. It has also been used on S&C ballast removal too.

In a UK first, Porterbrook has launched its pioneering Innovation Hub, a static train testbed to fast-track the development of new ideas and accelerate improvements to passenger services.

The Innovation Hub is intended to be used by a large number of small and medium-sized enterprises (SMEs) which play an integral role in the UK rail industry’s supply chain, but face barriers to entry to demonstrate new ideas and innovations in a ‘real’ train environment.

In response, Porterbrook created the Innovation Hub by re-purposing a four-car Class 319 train to serve as a working environment for a wide range of new technologies and passenger-facing improvements to be tested and showcased.

The Hub will focus on the following areas:

This will be the first time that many UK-based companies, particularly SMEs, will have the opportunity to showcase innovative and exciting passenger-focused solutions in a real train environment for free.

LNER is bringing Britain’s newest inter-city train to the show. Azuma 00105 passes Marshall Meadows (north of Berwick-upon-Tweed) on a trial run on May 15. Already in passenger use on the southern part of the East Coast Main Line, the Hitachi units are expected to carry passengers over the entire route from August.

LNER Managing Director David Horne told RAIL: “We are incredibly proud that one of our state-of-the-art Azuma trains will be featured at Rail Live 2019. As the newest and most advanced train in the UK, will be a wonderful opportunity to showcase the many features and benefits Azuma brings to creating the very best customer experience"